A Closer Look at the Dr.’s Message 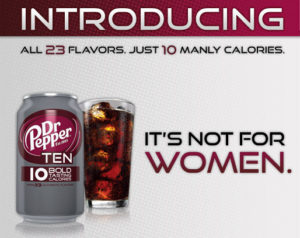 So as a person who is a believer and activist for gender justice, recently I found a post and discussion my boyfriend started on Facebook to be very interesting (both for the marketing and gender justice aspect).  The new Dr. Pepper Ten has come out with a very bold marketing campaign for their advertisement with the tagline: It’s not for women. Typically, I would find any statement that singles out a certain gender in this type of a statement (whether male, female, transgendered or gender neutral) questionable or degrading, but I actually find Dr. Pepper’s ad campaign clever, and less about excluding women. Of course, depending on the person, someone could interpret this message as men being more powerful and excluding/singling out women, but I don’t think that was the meaning at all.

A USA Today article says  “Dr. Pepper Ten is not the first diet soda aimed at men. (Think: Coke Zero and Pepsi Max.) But Dr. Pepper Ten’s ad campaign is the first to be so overt about courting men who want to drink a soda with fewer calories,” and that “Dr. Pepper said men, in particular, are dissatisfied with the taste and image of diet drinks.”

Some men may fear being judged by co-workers, peers or strangers by drinking lower calorie soda because dieting and eating low-cal foods and or drinking low-cal beverages has generally been marketed exclusively to women, and our society says to be a “Macho Man” you can’t drink these low-cal drinks.  And that’s all it is… Dr. Pepper’s way of honing into our society and making what I think is a smart business plan to increase sales.   Rather than seeing Dr. Pepper Ten’s tagline “It’s not for women,” as a bad thing against women, I instead see this drink and the focused campaign as being something out there that men, women, transgendered and those who do not identify with a gender to drink and enjoy without feeling judged.  By empowering men to be able to make a choice about drinking a lower calorie beverage, there are greater steps being made in our society that empowers everyone to be able to make their own choices.  This I think is more important than a possible setback that could be caused by a tagline that can at eye’s view seem offensive to women.

In order for our society to move forward in gender justice (and human rights in general), it is important to look at messages like this one and really understand what it means.  A business wants to make more sales and wants men to drink Dr. Pepper Ten. Their research shows that men feel there is some sort of societal stigma attached to diet drinks, so they made a plan to reach a certain group population.  That’s simply how I see it… and I really hope we make progress to allow people to do what they want when they want without being judged or feeling limited by societal norms.

So I don’t know about you, but I’m going to go buy a pack of Dr. Pepper Ten. After all, Dr. is a gender neutral title, right?!

What are your thoughts on Dr. Pepper Ten’s advertising campaign?  What other media messages or marketing plans have really caught your attention before?